Albion, IN - Over 25 area leaders, elected officials, and internet service providers (ISP) met this week to have a discussion about broadband services in Noble County. The Noble County Economic Development Corporation (EDC) hosted the event. 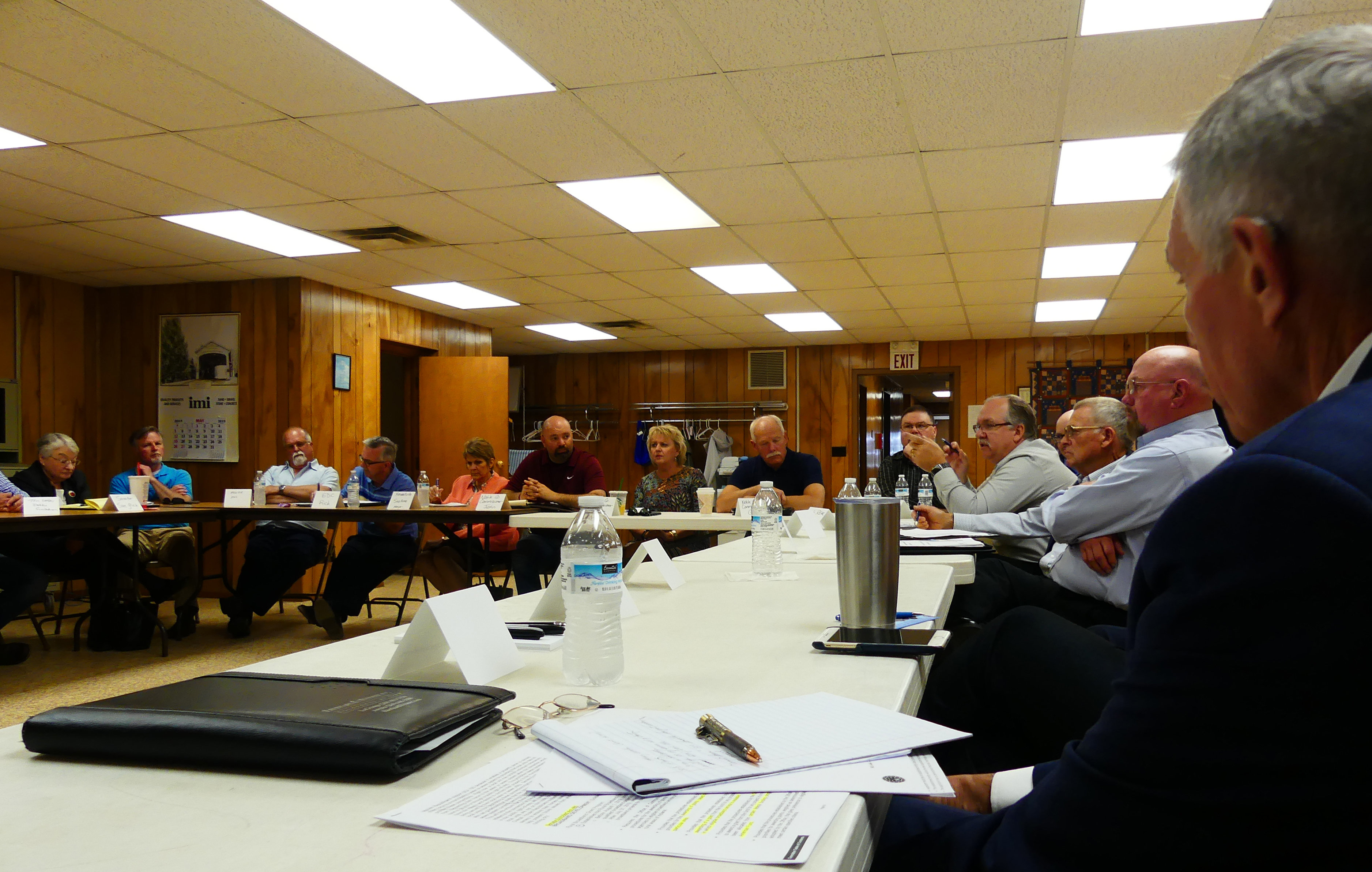 Indiana State Representative David Abbott (foreground) and other local and state officials and stakeholders heard updates from Ron Raypole from Noble REMC (fifth from right) during a discussion about broadband services in Noble County this week. Broadband is often cited as a critical amenity for new homebuyers and essential for business attraction, retention and growth. (Photo by Lori Gagen).

The discussion was in response to recent studies and surveys by various organizations that identify a lack of broadband services, and that broadband connectivity is a major factor considered by home builders, buyers, and businesses when choosing where to build, live, and operate. The EDC’s objectives for having the discussion were to provide ISPs a chance to meet the people and organizations in the county they might collaborate with, to hear about the challenges they face, and to determine next steps to help overcome them. Several people who attended expressed gratitude for the opportunity.

“This is the first county broadband discussion we’ve been invited to,” said Chris Crabtree, senior advisor to Congressman Jim Banks. “Thank you for the invitation and for putting this together. This really puts you ahead of the game.”

Representatives from LigTel Communications, Watch Communications, and Mercury Wireless attended the discussion.  The three ISPs were invited because each had recently sought letters of support from the EDC and others in Noble County to accompany their applications for NextLevel Connections funding. NextLevel Connections is a $100 million state grant program announced by Governor Eric Holcomb last September. It aims to bring high speed, affordable broadband access to unserved and underserved areas of the state. ISP representatives each provided updates on their plans to expand and continue to improve broadband services throughout Noble County and northeast Indiana.

Randy Mead, general manager at LigTel Communications, said they currently have 14 towers in Noble County. They added five in 2018, which increased service capacity 80%. The company invested to expand fiber-optic service last year to over 300 homes in the county. They hope to do the same in 2019. LigTel, founded in 1896 as Ligonier Telephone Company, is based in Ligonier. Mead said they already provide broadband access to more than nine of every 10 homes and businesses in the “897” telephone exchange in the Ligonier area, and have made a long-term commitment to all of Noble County.

Mead indicated LigTel’s strategy has shifted away from expanding wireless connectivity to expanding fiber-optic services. As fiber-optic service expands and wireless customers make the switch, those still using wireless also see improvements. At one point, Mead said, he had to make the decision for LigTel to stop accepting new wireless customers in some areas because they were becoming “over-subscribed”. Too many users in one area can result in diminished speeds and reliability, a trend he said could not continue. Mead even opted not to use LigTel’s wireless service at his own home so as not to further diminish the quality of service to other existing customers. 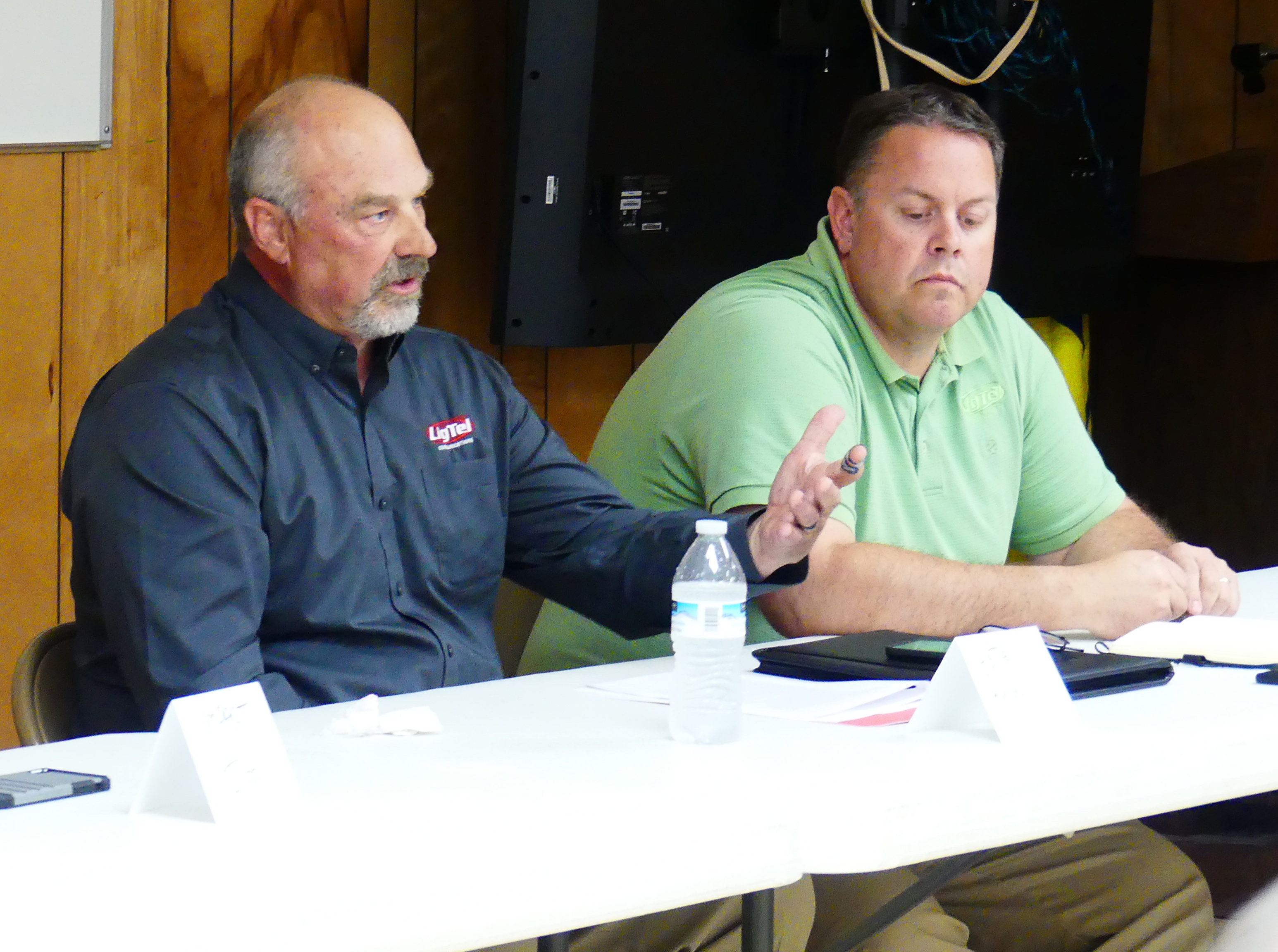 Randy Mead (left) and Mike Troup, from LigTel Communications, explained why the company is focusing on the expansion of fiber-optics to increase broadband connectivity in Noble County at a meeting this week hosted by the Noble County Economic Development Corporation. (Photo by Lori Gagen).

As LigTel focuses expansion efforts outside of Ligonier, they face some challenges. Mead noted that the state permitting process is lengthy, expensive and that processes change frequently.

“We just learned things are changing again, with the state requiring us to provide information showing where all the other utility providers’ lines are, on our permit application,” Mead explained. “It is a very cumbersome process and we have to rely on third party information that we aren’t even sure is accurate.”

Mead did credit some positive changes in Noble County’s permit process that reduced fees to help support broadband expansion, but said more recently the county added another fee related to crossing county drains. The new fee expense has more than offset the savings.

“The reason a fee was added to permits to cross a legal drain is that the county was consistently incurring expenses to repair lines that were damaged by contractors,” explained Gary Leatherman, president of the Noble County Board of Commissioners. “We can’t just keep paying for those repairs.”

Another challenge LigTel shared is related to “fall zone” regulations, referring to the area that could be impacted or endangered if a vertical structure, like a communications tower, toppled. Changes in those regulations have led to ISPs needing larger pieces of land to put up new towers. Tony McAhren, public-private advocacy manager at Watch Communications, echoed the sentiment.

“One of our primary needs is access to vertical assets, and land to put up more towers,” McAhren said. Fixed wireless communication requires a clear “line of sight” from one point to another. According to McAhren, the lack of vertical assets, structures between 100 and 150 feet tall, and the density of trees make using traditional wireless technologies challenging in Noble County. That is why Watch is also using Microsoft Air Band technology, one that harnesses “unassigned broadcast spectrum known as TV white spaces”, according to a 2018 white paper published by Microsoft. McAhren said Watch has had some good success with Air Band already, partly because trees pose less problems than with other wireless technologies.

Watch Communications, according to information published at broadbandnow.com, is the 18th largest fixed wireless provider in the U.S. with services in Ohio, Indiana, and Illinois. In March, Watch acquired Lightning Net, a wireless internet network serving northeast Indiana and northwest Ohio, including areas of Allen, Dekalb, LaGrange and Noble counties.

McAhren said Watch will be expanding broadband services in the northeastern portion of Noble County. The expansion is part of a commitment of tasks that will be subsidized by Connect America Fund II (CAF II) money. CAF II was a government “reverse auction” that took place about a year ago, an initiative administered by the Federal Communications Commission (FCC). The FCC is expected to disperse $2 billion in federal money to support broadband infrastructure in rural areas of the nation. An interactive service map at broadbandnow.com shows Watch currently provides service to about 24% of Noble County’s geographical area.

Another company, Mercury Wireless, provides wireless broadband services to about 30% of Noble County, according to Garrett Wiseman, president and CEO. He said the company was founded in 2007 in Kansas. Since coming into Indiana in 2014, Mercury has put up 10 towers in Noble County. Southern parts of the county currently have access to Mercury’s broadband service with download speeds of up to 30 megabits per second (mbps). The company plans to improve to 100 mbps service in the future. Wiseman said Mercury has also secured CAF II funding, which they plan to use to connect 1300 households using LTE advanced technology. They are planning to invest about $4 million into expansion over the next two years, according to Wiseman. Community support was cited as a key challenge Mercury faces.

“We are looking for community support to know that if we invest in services people are going to subscribe,” he said. One mayor at the table said she was unaware of Mercury Wireless before the meeting. Several stakeholders reassured Wiseman that they are willing to help communicate to residents and businesses about any and all ISP options available, and encouraged all of them to share their news of expansions and new services so they can help raise awareness, too.

Several local leaders shared examples of situations in their towns and cities that have challenged industries and small businesses, all related to lack of adequate broadband options. Susan Lawrence, regional manager for Indiana Farm Bureau, said she knew personally of two young entrepreneurs who left Noble County solely because they could not find the level of broadband connectivity needed to conduct business in the way they wanted.

“That’s two people, in their thirties, that I know personally left the area,” she exclaimed. “I wonder how many others there have been.”

It is that sort of anecdotal information, as well as hard facts and statistics, that will continue to propel the work of ISPs and the communities they serve in Noble County. The EDC aims to help make Noble County more competitive now and into the future by helping to facility these types of meetings. Some of those who attended the broadband discussion will also be present at an upcoming Regional Conference of Indiana’s Office of Community and Rural Affairs (OCRA).

OCRA is accepting registrations now, at $40 per person (including lunch), to attend the regional conference at the Potawatomi Inn at Pokagon State Park in Angola on Wednesday, May 29 from 9:00 a.m. to 3:00 p.m. On the agenda for that meeting is a session titled “Broadband: becoming a smart consumer and resources for your community”. Presenters are expected to be on hand from Purdue University, Community Development Block Grant (a program of the U.S. Department of Housing and Urban Development), and OCRA. Scott Rudd, Indiana’s Director of Broadband Opportunities, is also listed to be on the panel.

The EDC encourages those looking to connect within Noble County in an effort to build out broadband services to call (260) 636-3800 for assistance. Any ISPs serving the area are invited to share news releases and service map updates with the EDC to help raise awareness among citizens and businesses. For more information, visit www.noblecountyedc.com.